Click on areas of the image to identify them. The original hangs in the library’s Reference Area. 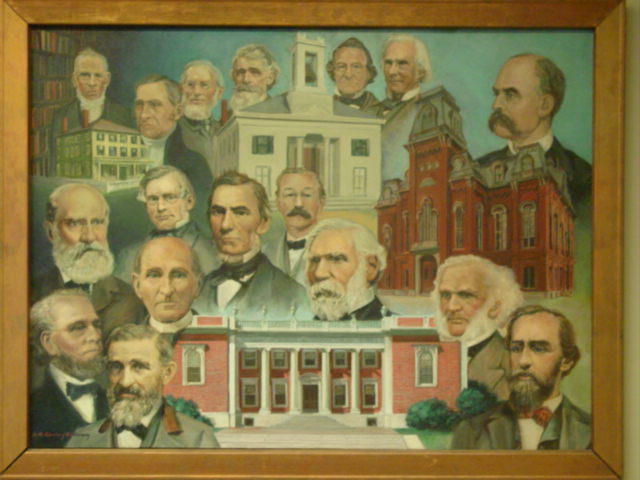 The old Ecclesiastical Library was first kept in Emerson's parsonage.

The library was later housed in the rear store area of Lilly Eaton's homestead at the north corner of Main and Salem Streets.

Franklin Poole (1808-1898) was a major figure in 19th century Wakefield, serving as a legislator and active abolitionist, as well as being a newspaper editor, professional house painter, and amateur artist.

A town leader who also served as a librarian.

Promoter of an Agricultural Library.

Promoter of an Agricultural Library.

The library was formally established in 1856 on the first floor of a building that once stood on what is now the Lower Common.

Donated to the Town in 1868 by Cyrus Wakefield, the first floor of the new town hall became the library's home in 1872.

Industrialist and benefactor, Cyrus Wakefield donated the 1868 town hall to the community, and voters decided to change the town's name from South Reading to Wakefield in his honor.

Library trustee and owner of the Main Street property on which the current library building was built in 1922.

The 1922 building was constructed on Main Street at the corner of Avon Street. The building was designed by noted architect Ralph Adams Cram.

Beebe served as one of the original trustees and funded the original library. His son Junius later donated funds to construct the 1922 library building and the library was named in Lucius' memory.

The old Ecclesiastical Library was at first kept in the parsonage of Rev. Reuben Emerson (1) and later in the rear store area of the Homestead (2) on the north corner of Main and Salem Streets, which belonged to Lilley Eaton II (3). There also were housed the later Social, Franklin, Phrenological, and Mechanics Libraries, each of which was promoted by various town leaders, among whom were Franklin Poole (4), and one who served as librarian, Abel F. Hutchinson (5). Two who had an interest in promoting an Agricultural Library were James Eustis (6)and Samuel Kingman (7).
Then in accordance with the new Massachusetts edict in 1856, the Town Public Library was organized, located on the first floor of the Old Town House (8) on Church Street where it crossed what is now the Common. This location served well until conditions became crowded. So in 1872 the Library was again moved, this time to a section of the first floor of the new building, the 1868 Town Hall (9), a gift to the town from Cyrus Wakefield (10).
Among the hardworking citizens who made up the original committee to establish the Town Library were Benjamin F. Tweed (11), James Oliver (12), George O. Carpenter (13), and Lilley Eaton III (14). Several also served on the first Boards of Trustees, as did Edward Mansfield (15), upon the site of whose home was later to be erected that which fulfilled the ultimate dream, a special library building made possibly largely by the generosity of friends, and given the name of The Lucius Beebe Memorial Library (16) to commemorate the services and generosity of that member of the original Board of Trustees, Lucius Beebe (17). Others working with him in the same capacity will also be long remembered: James M. Evans (18), Ebenezer Wiley (19), Paul H. Sweetser (20), and John S. Eaton (21).

Events, Online Activities, Resources, and More! Stay in the know and sign up today for the Lucius Beebe Memorial Library Newsletter.